Advantages and disadvantages of Soybeans 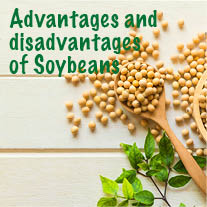 Originally from China, where it has been part of the diet for more than 3,000 years, it belongs to the botanical family of leguminous - such as chickpeas, lentils, beans, peas - and is known by the common name of soy, but also like soybean or Chinese beans. From the 7th century onwards it began to be known in the rest of the world: first in Japan, one of the countries that currently consumes the most; then in Europe, in the seventeenth century and the next century in the United States.

An advantage point of soy is undoubtedly its nutritional value. With a considerable content of protein (32.8g per 100g) and polyunsaturated fats such as omega-6 and low in carbohydrates, soy is highly appreciated by the vegetarian community and can be a relentless aid in weight loss. In addition, in terms of micronutrients, the soybean grain is rich in: carotenes, niacin, folic acid, sodium, potassium, calcium, phosphorus, magnesium, iron and zinc.

In addition, it has the ability to reproduce some of the female hormones such as estrogen, which helps to stabilize the hormonal part, especially in the menopausal phase, decreasing the symptoms of the hormone, and even in the prereminal PMS.

However, it is a controversial food, which should be consumed with caution and avoided by people with specific situations, with the risk of causing harm to their health. With numerous applications in the food industry, such as soy drinks, soy yogurts, soybean meal, soybean oil, tofu or soy sauce, soybeans in addition to being used as a food additive (especially soybean meal) due to its low cost, is also largely produced by the world through the process of GMO (Genetically Modified Organism) or Transgenic. This process makes the crop more resistant to pests, but the substances placed in this process, can be potentially dangerous for our health. In addition to this type of food being highly allergenic, it is believed that it may cause drug resistance and in environmental terms the transgenic crops can end up with many living species, which can also cause a huge unstability in the environment. In terms of the individual health, more studies need to be done, however, and as a precaution, as long as there is no further information, soy should be consumed with caution and preferably in its organic form.

Another negative note goes to the way we consume soy today: through processed foods such as soy drink, granulated soybeans, sauce, yogurts, which, besides being over processed products, also have an immense sugar content as is the case of most soy drinks.

Another disadvantage is that high intake of soy-based foods or soy isoflavones may be related to early sexual development, infertility and increased incidence of breast cancer in girls, ie when consumed in excess will potentiate a hormonal dehy- so in individuals with breast cancer, soy intake is completely discouraged.

As in everything, equilibrium is always the key word, and a community with increased food literacy is a community that will make healthier, wiser and more conscious choices!

For Mercearia Bio Green Card holders we will ha...